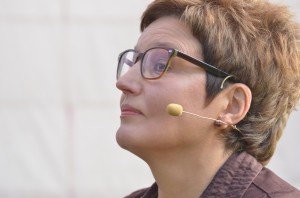 One of the major sponsors of the Festival of Opinion Culture, the Open Estonia Foundation (OEF), gave us an unexpected gift this year: we applied for 13,000 euros financing and received 15,000 euros instead. Of course, this made the organising team overjoyed and we were deeply moved.

Mall Hellam, the head of the OEF, told us this week that we would have had great difficulties without the foundation’s support last year. She is absolutely right! We are very glad that the Festival of Opinion Culture was held for the first time last year, mainly with the support of the OEF, and it is with their continued assistance that we can return to Vallimägi Hill in Paide on 15–16 August. There would be no Festival of Opinion Culture without our sponsors, so we asked Mall Hellam why the OEF supports the festival and what their plans are this year.

Mall Hellam, why has the OEF decided to finance the festival and why by such a large sum?
One of the objectives of the Open Estonia Foundation is to strengthen a society that values a diversity of opinion and open discussion between people, associations and authorities. For almost 25 years we have supported initiatives that we believe our society has been lacking, and that would make us wiser and more open. The communication gap between the authorities and the population has become dangerously wide. This is exactly why we supported both the discussion day of the People’s Assembly ‘Rahvakogu’ last spring, which evaluated the political behaviour patterns of our parties and appealed to people to think about legislation, and Festival of Opinion Culture first implemented last summer. We believe it will become the largest and most comprehensive discussion forum held in the public space for Estonian people.

The festival would have found it almost impossible to organise on such a large scale without our assistance. So we thought it natural to support both the People’s Assembly and Festival of Opinion Culture.

Why is it important for Estonia to have such an event and to make sure it endures?
Continuous public discussion, expressing one’s opinions and supporting them with arguments, finding a common truth and looking for consensus are the pillars of a democratic society. Festival of Opinion Culture, with its inclusion of non-government organisations, parties, entrepreneurs, cultural figures, media and the general public, is a small-scale model of society. We discuss, listen, argue, and do it of our own free will in the company of warm summer days, good entertainment and friends – but also with people who think differently.

How important is it for the OEF that the festival is organised as a volunteer project?
Organising an event on a volunteer basis, especially such a large-scale event, is always a milestone of a kind. It shows that a great number of people care about the type of society we live in and what the values of our country are, and that they are ready to contribute with time and energy. Volunteering is naturally accompanied by civil activity; it unites very different people and generations and brings us closer together.

Are you going to attend and what are the foundation’s plans for Festival of Opinion Culture? What do you expect from the festival this year?
Of course we are coming to the festival this year, and we would like to make sure that the discussions that are related to our society and influence take place and come to something.

We would also like to attract attention to the topic that we raised last year, together with top media managers, about anonymous hate speeches and the way that the most popular media is going to protect its readers and the people they talk about from insults, hatred and abusive language.

We also care about the future of Europe and of Estonia within it. Although concerns that the European Union can collapse are subsiding, there will undoubtedly be discussions about how we can join forces to cope with future financial, economic, political and social problems. In addition, we care about the future of Ukraine as well as understanding the nature of present-day Russia and Russia’s potential choices for peaceful coexistence with the west.

This year’s budget of Festival of Opinion Culture is around 40,000 euros, of which 15,000 come from the Open Estonia Foundation.

The Festival of Opinion Culture will offer participants more than 150 different discussions about the present and future of Estonia, as well as radio shows, cultural events, workshops and festival clubs. Political movements and parties will set up their own ‘world view cafés’, and the media will be there with their stages and on-air studios.

“We are holding this festival in order to see it gradually become a valuable, free and inspiring discussion environment for active residents of Estonia,” said one of the organisers, Urmo Kübar. He is the head of the team that prepared the schedule for the Hilltop Stage and Lowland Stage. These are the only two stages where the programme has been established by the festival organisation team. All other discussions will be held in cooperation with various organisations and associations.

The Hilltop Stage and the Lowland Stage will see almost 20 discussions on the topics most important to Estonia. Participants will consider whether it is sensible to try to stop emigration and what to do with our mineral resources, investigate where the joy of school days has gone and discuss the role of the state in entrepreneurship. The discussion topics also include security, life in the countryside, the health of Estonian residents and the wise and soft authorities of the state. The question of what the future holds for the century-old Republic of Estonia is also on the agenda. The festival will start with a discussion by former prime ministers “What would we have done differently today?” The heads of political parties will meet in the last discussion. The titles and timeframe of the discussions have already been put on our web page, and the names of the speakers will be gradually published over the summer.

“Our team of volunteers has been busy with preparations for the whole spring, and dozens of people worked to compile the programme that has appeared on our web page today. Many ideas occurred to us in February during the brain-storm that yielded over a hundred suggestions,” said Kübar, admitting that, unfortunately, not all of the ideas would fit on the official festival programme. “Still, there will be an open microphone for those who can’t find their topic on the Hilltop Stage, the Lowland Stage or any thematic stage, or one can occupy a spot on the lawn and start a discussion.”

This year, Festival of Opinion Culture will be held on 15–16 August on Vallimägi Hill in Paide. This will be a meeting place for alert and active people to discuss the topics important to Estonian society and its people. The festival aims to bring together various points of view and ideas so that new knowledge can be born through discussion, new initiatives beneficial for society can be started and the discussion culture in Estonia can develop. The Festival of Opinion Culture was first held last year, when around 50 discussions and workshops took place over two days, involving 200 active speakers and 2,000 visitors.

The preliminary schedule of this year’s Festival of Opinion Culture is available here.